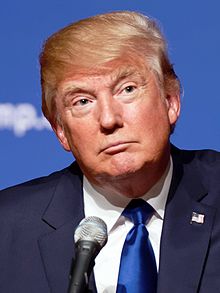 Image courtesy of WikiMedia Commons under a CC-by-SA 2.0 license.

This letter is dated 9 January 2017. Mr. Trump is still President-Elect. He hasn’t made it into office yet. I’m writing this to remind you of how poorly he’s handled allegations of Russians hacking U.S. political groups. It’s deeply concerning for a bunch of reasons, but I’ll try to keep this brief.

First, Mr. Trump pretended this wasn’t a big deal.
He showed a willingness to publicly put down intelligence analysts who gave him the information they collected. Before he’s taken office, he’s shown quite clearly he’s capable of ignoring facts simply because it doesn’t fit a narrative. Considering the belligerent remarks he’s made while in office, and the tweets he’s released on this, he very well has the ability to start World War III with Twitter.

President Obama had to publish intelligence information to change Mr. Trump’s rhetoric.
Right now, this entire debacle shifted only because the current President took steps to force the President-Elect to actually acknowledge facts. Sadly, Mr. Obama will not be in Mr. Trump’s cabinet. He won’t be around to tell Mr. Trump that he’s embarrassing himself and the country. Someone else in the White House is going to have to step up and take on that role.

Meanwhile, Congress actually might agree that Russian interference in our election is a bad thing. While nobody’s saying that the influence actually affected the election overall, it’s the attempt by a foreign government to hijack an election that matters. Normally Congress is too busy preening and heckling the White House to actually do its job, so I think it speaks volumes when they can get behind something and unify. Mr. Trump hasn’t shown he even cares about the significance of this.

One last thing.
I wanted to write this in a more lighthearted tone, but this is the second big thing that Mr. Trump’s done before even taking office. He isn’t in the driver’s seat of a country yet. This is all happening before he can actually give orders to people.

I know you’re reluctant to consider the possibility of Congress impeaching and convicting Mr. Trump, but you might want to consider getting on board with the idea. It looks like GOP members of Congress are already wanting to do things Pence would approve of, so it wouldn’t change much. The only difference is that Pence doesn’t hop on Twitter and say the stupidest things in public. So there’s that.

Oh, and if you have to consider fleeing to a different country, pick Mexico at first. Everyone else too lazy to have learned Spanish will probably be trying to get into Canada. I’ll try to work on improving upon the Spanish you learned in high school.

7 thoughts on “Note to Future Self: Donald Trump, Part 2”