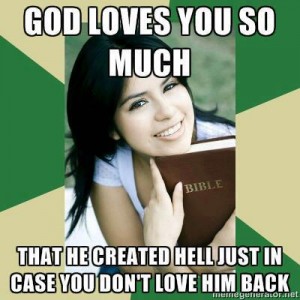 One of the softer sells of Christian faith where I live involves this growing claim that real Christianity™ is a relationship and not a religion. One example of it is here on Ark’s blog down in the comments. Compared to the more traditional routes of preaching, it seems like it’s more respectful of different beliefs. Nonetheless, it’s quite often selling the same concepts of sin and salvation, just in a more family friendly manner.

A different label is on the box, but the same mystery meat is inside.
Still there is this all-powerful entity which won’t open a Facebook account but will punish people for not mentally friending it back. There’s this idea that people need help from an invisible source to be better/more complete/less flawed versions of themselves. While the songs in worship might be catchier and the sermons less boring, there’s still the idea that people need to gather weekly to tell this deity how awesome it is for being there for the entire human race.

Having a new label doesn’t make the product inside any better. No matter how clever one wraps words of love around it, there is still an entire philosophy based entirely on the concept that people are inherently depraved. While the new label might not be as outwardly harsh as more traditional ones, it still doesn’t fully deal with toxic beliefs. And yes, pretending those toxic beliefs aren’t there isn’t exactly what some might call improvement.

Even more to the point, the relationship being offered is pretty fucked up.
This relationship is supposed to be consensual, but there is an eternal punishment for rejecting it. It doesn’t even fully matter if someone lives their life according to these beliefs just so long as there’s some magical trick of faith performed before death. The reward for performing this trick is eternal life in Heaven – and it doesn’t get much more defined than that.

I recognize that the picture I paint here is bleaker than what someone who is selling the faith might paint. But let’s face it: not everyone gets to have their perfect temporal existence before getting whisked up into the heavens. Some people will spend their entire lives wishing for some relief from their suffering and get rejected by their deity which all their friends assure them is really real. They’ll get pushed and pulled by fellow congregants into donating money they can’t afford to donate so the church can recruit that awesome bass-guitarist for their worship service. Or worse, so they can recruit that out-of-state minister who didn’t report his child sex-abuse charges on his resume.

Meanwhile, the relationship is still one-sided for everyone that sells it. It’s a life of looking at reality and pretending every little benefit that comes your way is really a gift from a deity. Every little setback is either outside of a divine plan or the product of a very personal failing. All good things are not anyone’s fault, and all bad things are YOUR fault.

In the end, the relationship is just a religion reworded.
Until the religion itself gets worked on, criticism of Christianity will continue. It’s not enough to just de-emphasize the lack of humanity in this old belief system. Pretending it isn’t there won’t make it go away. I know this from firsthand experience.

Until the fundamentally flawed aspects of Christian beliefs get dealt with, repackaging the product isn’t going to do any good. Blaming people for being themselves doesn’t promote anything healthy that I’m aware of. At best, it coerces people into learning mental gymnastics. At worst, it kills.

12 thoughts on “An Abusive Relationship. And a Religion.”