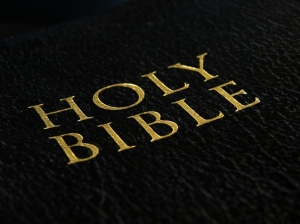 There’s a good discussion going on over on Nate’s blog about how strict the bible can be interpreted (and even getting into what it all means). Each position questions the consistency of particular outlooks on the bible, with side issues getting raised about possible errors within the text. If those errors exist, then it means the bible is not reliable, and consequently it is useless as a guide for Christian faith.

This matters, because inerrancy is the actual foundation of the faith.
One can see this in the way churches can organize together; similar denominations will confess a similar view of the bible. Convince people of holding the same outlook on faith, and one can engage in fellowship with them. As churches grow and shrink, it’s a literal manifestation of each specific view’s popularity.

Outside of that, holding people to their own standards matters as well. It makes no sense to say “this means something” and then act against that meaning. When you get two people who are looking at the same thing and come up with different meanings, this can be exceptionally frustrating. Who gets to be right, and who gets to be wrong?

The answer to this question hits at why biblical interpretation has gotten relaxed in recent years.
To put it bluntly: read the bible wrong, and you go to hell. Over the course of Christianity’s history, there have been many attempts to change and modify what it means. Indeed, the canon of the bible got settled because of various other churches that taught things way outside the official Roman consensus. One of Roman Catholicism’s first duties was to make sure everyone was on the same page, because souls were at stake.

After centuries of wars, murders, and executions to keep one view of the faith, this gave way to a more civilized interpretation of things. Nowadays, there can be multiple paths to heaven. Everyone doesn’t have to use the same version of the bible in their church pews. Some beliefs might be out of bounds, but fellowship is the answer, not burning someone at the stake.

Of course, Christians still pay lip service to the idea of an inerrant bible. It’s still necessary, because there are still people outside the faith. People like me need to get told that I’m misunderstanding the faith, getting it wrong, and going to hell in a handbasket filled with broken glass.

Can people have it both ways here?
That’s an issue getting danced around on Nate’s blog and in many other places. Putting it differently, if non-Christians will go to hell for not believing the wrong things, then so can Christians. The label itself doesn’t protect anyone from divine judgment. Faith and grace are what allegedly save people if we’re to take reading the bible seriously.

Thus, while moderate interpretations of the bible might sound nice, they still don’t escape the notion that the right beliefs matter. Either a belief is correct or incorrect, and it cannot possibly be both. When one set of Christians says music in church is wrong (I’m looking at y’all, Church of Christ), and another says it’s totally okay (Lutherans are guilty as charged on that one), which one is right? Not resolving the matter could mean some people end up going to hell despite trying their damnedest to get it right.

On the opposite side of things, the problem only goes away if the bible is not held as an authority on the faith at all. It must not carry any weight, or else logically people must find out what exactly it commands. The bible becomes only a device for inspiration rather than a manual on doing Christianity correctly. If it has the force of any law, then that force must control.

As a deconvert and an atheist, I’m kind of happy I don’t have to worry about it anymore.
When I was a Christian, I’d sometimes hear people say that their god told them some really specific things. Such revelations concerned me, because I wanted to get my faith right. All I could rely to keep away from believing these things was a belief that the bible would tell me which was right or wrong. But in a world where divine revelations used to happen all the time (the Old Testament was FULL of them), I sometimes had to take extra study time. Importantly, if they were wrong, there was a chance they might end up convincing people of the wrong things too.

I have to question whether that was a healthy state of affairs at all. Disagreements happen over many things. As it turns out, my desire to do right by others got used against me. This was rough on me, as I’m sure it’s rough on many practicing Christians today. The consequences of some parts of the faith can extract more than a pound of flesh.

17 thoughts on “Why Biblical Inerrancy Is A Thing”