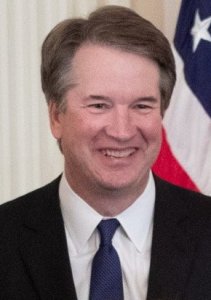 For those people who don’t know who Brett Kavanaugh is, he’s Trump’s nomination to fill a U.S. Supreme Court vacancy left by Justice Kennedy. He’s expected to be quite conservative if confirmed, which would make the Court as a whole shift more to the political right on decisions. Also, he’s been accused of sexual misconduct – something he initially denied happened during committee testimony. Only one of his accusers has testified before the Judiciary Committee. Her testimony is something most of the country watched yesterday.

That last part’s very important.
This whole process is symbolic of the disconnect between the Republican Party, its shift to the extreme, reactionary right, and the views of future voters. Right now there’s polling data about public opinion on this issue, and it slightly disfavors Kavanaugh. At the least, Kavanaugh is potentially galvanizing the more people believe Dr. Ford’s accusations against him. So why is the committee still bent on pushing the nomination through?

Timing is one issue. If Kavanaugh gets his nomination pulled, his successor would have to get confirmed in record time during a lame duck session. This is something the Democrats could score political points on, especially if they won back the House of Representatives. Most likely, it would kill any nomination getting confirmed before a new Congress gets installed, and that’s a risk for Republicans.

All of this doesn’t take into account how the voting public views all of this. A majority of people do not want Kavanaugh if they think Dr. Ford is right. So, the Democrats could turn her accusations into a campaign issue that could go viral just like the #MeToo movement. Democrats would also rightfully be able to point out how the GOP doesn’t seem to have made any advances in treating women since the Anita Hill hearing almost 30 years ago. It speaks for itself that the GOP doesn’t like women.

It’s also tone deaf to younger voters. Republicans are becoming a byword for people under 40 as untrustworthy and out of touch with reality. Their platforms often run on scaring people or irrelevant issues. Where I live, GOP candidates talk about belief in their invisible sky wizard friend more than their stances on climate change. I can’t get policy statements from candidates, because their voters don’t care about them.

No matter what, the Democrats win here.
I don’t think the GOP understands how bad a position they’re in. If you go to Five Thirty Eight’s site, you can find that the Democrats already have a roughly 4 out of 5 chance of getting the House. Their chances for the Senate will improve too, especially if there’s a galvanizing issue which gets even more voters to the polls. This could happen even if Kavanaugh gets voted on without confirmation, since it would still be seen as GOP support for a guy who allegedly attempted to rape a woman in high school.

The saddest thing here is that all of this is happening because a group of people isn’t facing facts. Like I alluded to earlier, the GOP base has refused to admit the existence of important issues. That denial can only go so far before conservatives are forced to actually pull their heads out of the sand. And really it’s only happening because it’s easier to get votes living in denial.

For the record, I believe Dr. Ford – and it damns the GOP.
The reason why I didn’t watch the streaming of proceedings is that I don’t have any reason to not believe Dr. Ford. She’s not making claims that couldn’t have happened, she’s shown evidence of her struggling with this before the nomination was an issue, and that evidence is from a disinterested third party. Or, in other terms, there’s no way there could have been an agenda because the agenda didn’t exist when the evidence was created.

And if Dr. Ford’s allegations are true, it also means Kavanaugh perjured himself when he initially denied the allegations. Lying under oath is a bad thing. It’s evidence that can get used against you in court for the rest of your life. Even convictions for murder can’t get used against you like that. This guy is wanting to determine judicial policy for the next several decades, and he can’t be bothered to tell the truth? And what does it say about a party willing to tie themselves to him?

And I wonder what this says about the world we live in.
I don’t know if I like living in a world where a liar can judge others and the person he attempted to rape gets vilified. Every single value Americans holds dear gets violated. It reminds me of the hypocrisy of our political system, and the pointless pursuits of meaningless political advantage. At the end of the day, Dr. Ford should have gotten her chance to return the favor to Kavanaugh for what he tried to do. While it wouldn’t have been justice, it would at least have been a consolation.