Salt under the Microscope

I had a troubling thought the other day: there is no way I can expect anything restorative from my former religion or people trying to represent those beliefs. Some people might find this obvious. There have been times over the past several years that I’ve come close to realizing it. Then, I’d slip back into the comforting belief that I could get something – anything – which might help me come to terms with what I’ve lost.

Former Christians deal with this in different ways. Some take a belligerent route, going directly at vendors of cosmic snake oil under any and all circumstances. Some take a conciliatory route, avoiding any and all conflict with the subject of Christianity. Most everyone falls between these extremes, picking and choosing what animates them and what they can ignore. But underneath it all are themes of loss and wondering what to do with all that time spent worshiping a god that never existed.

For me, the wondering has not always been healthy. I’ve become reluctant to post about this because I know it will make people angry. In return, they say some pretty monstrous things rather than try to understand what I’m saying (or ignore it; I don’t force people to read this blog). Beyond this, I can get lost figuring out what I want, if anything, from a religion that didn’t care when it broke me. 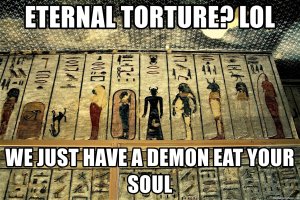 First off, I don’t expect anything from the supernatural.
This can probably have its own long post on the subject. To put it as succinctly as possible, the divine isn’t real. Because it isn’t real, it cannot do anything in my life or even do anything indirectly affecting my life. All of the promises I’ve gotten here and elsewhere over the years have been the acts of individuals who made their own choices. Their beliefs don’t even reflect a uniform guiding hand.

I have to admit that writing this feels weird to have to say, but it’s not something that’s obvious to everyone who leaves Christianity behind. There is this urge to still treat Christians as a monolithic group, as if it were more unified than it really is. Because of all the implied perceptions and pitfalls surrounding the faith, I can’t help but feel like I’m adding to the delusion of power when I criticize Christianity as a unified set of principles. Instead, I have to accept that the beliefs are fluid, and they depend more on perception than any objective reality.

My old religion isn’t represented by anyone other than me.
The consequences of this are fairly extensive. Most important is the notion that nobody else gets to tell me what I experienced during my faith journey. Yes, I can share ideas with people, and those ideas can be concrete enough to be understood. However, they are almost never uniform in application.

And this makes sense, considering how often I’ll have people tell me my description of my former beliefs isn’t representative of TRUE CHRISTIANITY™. For example, I personally took the biblical teachings regarding sin and salvation a little too much to heart. As a consequence, I developed what might be a permanent delusion regarding my lack of self worth. Not every Christian is going to see the connection. But since they’re still under the belief that some invisible puppet master is pulling the strings, I have to be wrong or a liar or worse.

While the enmity is something I sort of expected – the level can be staggering at times – my experience within Christian ideology wasn’t entirely negative. There’s always been that part of me that expects it to show up again. Time after time, it doesn’t. On occasion I might have the beginnings of a positive interaction regarding faith, but eventually it devolves into me feeling like I have to straitjacket my speech in order to make the awkward encounter go away. To be completely fair, this last part also can happen with people who aren’t Christian. 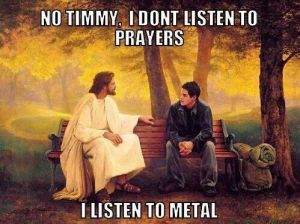 The practical bottom line.
The people who claim a label that I used to claim aren’t equipped to handle what I bring to a discussion on religion. Even if I’m able to make sense, it would require them to give up their fundamental assumptions of what’s real and what isn’t real. Since they are the promoters of what is “Christian,” I am in a place where they cannot go if they want to keep that label.

This is where I realized that there’s nothing my former religion can do collectively or individually to undo any of the problems I developed while trying out its intellectual snake oil. There will be no apologies that are meaningful, no restitution which can give me back my mind. Any and all previous attempts were done by people who are intentionally or willfully ignorant.

Normally something like this might make me feel a little despondent, but I also have to remember that there are plenty of people out there who are religious but don’t make an issue of it. This actually gives me hope, and it is the positive thing I cling to at times like this. I do share something in common with them. More hardcore practitioners of Christianity will find fault with them for trying to be decent people. Ever since leaving my faith behind, I’ve been trying to figure out how to do it myself.

Managing these expectations has helped me manage my mental health on the subject.
It doesn’t matter to me if religious people I know feel the need to profess their beliefs. Perhaps it’s a relic from my former faith that makes me second-guess finding an outlet for my own thoughts. I’m applying a double standard that I can’t live up to.

More than this, managing my expectations helps me manage the unhealthy thoughts I have when dealing with my old religion. It’s unreasonable for me to expect healing from a system of beliefs that harmed me. People who practice it like I used to can’t be expected to be positive on the subject.

3 thoughts on “Happiness After Christianity: What To Expect From My Former Religion”