So, a while back I attended my sister’s wedding. It was a really nice wedding, in spite of the religious portion of it. She and her husband are still religious, and I’m sure they enjoyed it. For me, now on the outside of faith looking in, I had somewhat of a rough time. Some of the things said during the ceremony were pretty messed up if you don’t believe it’s real. 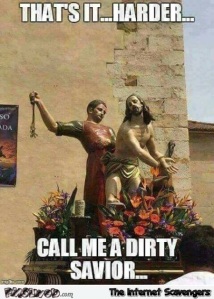 Bigamy is illegal in Alabama, but I guess exceptions are made for the late JC.

Still, I remember how this is supposed to make sense. You’re supposed to be married to your spouse (heterosexual couples only, of course) FOREVER. Divorce is only okay if the other spouse cheats on you. And even if someone cheats, if you’re a woman, then your church is probably going to blame you anyways.* 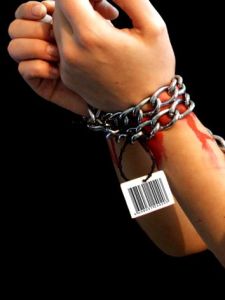 There’s another set of fine print in this blood pact.
The thing that got me the most was how much the pastor associated the term “successful marriage” with “Jesus.” Doing it once could have just been an accident. Turning it into a sermon kind of made it intentional. Fellow deconverts know exactly what I’m getting at.

The pastor implied people who get divorced didn’t really try hard enough to obey their sky wizard. With divorce rates being what they are, it helps practicing Christians explain why someone could get married, do everything the church demands, and still terminate a marriage. Failed marriages are always the couple’s fault. It’s never Kim God Un’s fault.

Normally, I’d remind myself that these people are consenting adults. If they want to believe that, fine. But this was my sister. I felt like the church was ready to throw her and her husband to the wolves. And I felt I was the only person in the room who saw it.

Sometimes it sucks being the only atheist in the room.
The part of me that hates bullies and mob rule wanted to stand up and walk out. I wanted to stick up for my sister and her husband. With what they contribute to that church, they deserve better than an equivocal “fuck you if you leave us” speech.

More than that, I became aware of how obscene some religious ideas can be. The pastor took divine responsibility for any happiness everyone felt. He also said it’s the couple’s fault if anything bad happens. At no point did anyone give credit where credit was due. It takes courage to jump in front of a crowd and declare you want to build a life with someone else.

But I couldn’t interrupt the service and say that. Even if I had, there wouldn’t have been many people who would understand what I was saying. I felt like I was a witness to something perverse. That, in turn, leads down an entirely different and ugly path.

In the meantime, I think churches should add this song to their hymnals:

*I’m aware of two instances (one recent) where the church community quietly ostracized a woman with a cheating husband who filed for divorce. Nobody says anything overt, but the gossip mill makes everyone in the congregation slowly remove the poor woman from anything of substance. As a result, these women lose their friends in addition to all the other messes of divorce. And this is just a drop in the ocean of impossible church standards for women.