If you’ve seen any of the Marvel Cinematic Universe (MCU) movies in the past decade, then you might have noticed something odd. Thor – the Norse god of thunder – walks and talks among the other great heroes of the Avengers. He goes to Asgard (pronounce, when I’m a little drunk, as “assguard”). His nemesis brother Loki is real. In other words, Marvel pretty much has a world where the Norse gods proved their existence.

Why isn’t anyone converting?

Here you are, talking to a god. He’s on TV. He does god-like things with lightning. No mysteries, curtains, smoke, or mirrors. Just Thor. Sometimes Loki. And no new churches popping up everywhere.

Nobody’s taking down crosses and replacing them with Disney-approved religious paraphernalia.

Daredevil’s still depressingly Catholic. People still go to church. Not a single person says, “Hey, you know what? Maybe I should worship the dude who’s saved the Earth from invasion rather than someone else.”

At the least, every atheist in the Marvel Universe should issue an apology and start sporting hammer tattoos and WWTD bracelets. I know I would. It’s the least I could do for a deity that finally decided to stop being camera shy and prove its existence.

That doesn’t happen either. I don’t get it. And it’s my dealbreaker for the universe itself.

Nerd billionaire invents power armor in a cave in Afghanistan? Sure. Scientist hugs radiation and gets a raging green erection? Why not? Kid wanders around unsupervised in a lab to get bitten by the one spider that hands out superpowers? Sign me up.

Have a deity fly to Earth and solve a major question of humankind and receive not so much as a single eyebrow raise or question of how to convert? Nope. I’m out. 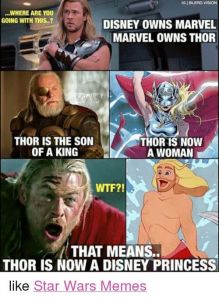