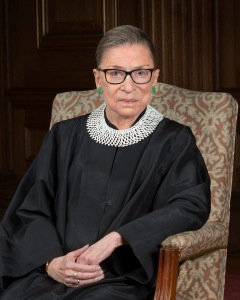 Image is in the public domain and courtesy of Wikimedia Commons.

Ruth Bader Ginsburg is dead. If the NPR article is true, Mitch McConnell will make sure Trump fills the seat before Trump leaves office – regardless of whether Trump is reelected. This will throw gasoline on an already raging dumpster fire that is the 2020 political cycle.

Okay, so the duplicity isn’t a surprise.
The stated reason McConnell had for delaying an Obama nomination to the court in 2016 was to let the election decide the outcome of things. Trump has nominated two justices to the court already, ostensibly pushing it more ideologically to the right. A third conservative justice could weigh things further in that direction. Lifetime appointments would make this the most lasting legacy of Trump’s presidency.

This is the reason for the reversal in McConnell’s outlook. The chance to have a Court rubberstamp conservative legislation is too good to ignore. At the least, it would help swing things in close cases in the favor of Republican legislation and interests.

Except conservative leaning courts aren’t new.
Technically speaking, the only liberal Supreme Court was Earl Warren’s. Conservative politicians have been pretty adept at keeping left-leaning justices to a minority. In this light, it should be surprising that some of the effects of the Warren era have lasted for decades. It’s not that conservatives didn’t have the votes – it’s that justices at least recognize some of the effects they have on the country.

And Warren himself was appointed by Eisenhower, a Republican. He was an accident of his time. If people knew what he’d do to end segregation and promote civil rights, they wouldn’t have appointed or confirmed him. So, there’s precedent that Trump could end up nominating someone who looks conservative and then will take a hard left.

And even if the Court takes a hard swing to the right, that won’t be great for conservatives.
Everyone’s civil rights will get eroded, for starters.

On top of that, some conservative policies are not popular. Curtailing civil rights will most likely end up causing a massive swing to the left in Congress and the Presidency. This is already happening.

Regardless, 2020 is the year that keeps on giving.
For anyone playing 2020 disaster bingo, the death of RBG box is now fillable. Congratulations. From pandemics to economic downturns to everything else, this year keeps serving up hot messes. We’re still not even three-quarters of the way through.

I think I’m going to learn how to construct my own safety bunker and underground living facility.